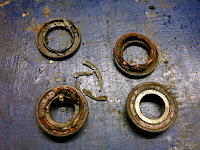 It has been a long week. Changed oil on the drz and kdx, installed rim locks on the drz, replaced rear rotor protector on the drz, new tire on the v-strom, new rear wheel bearings on the kdx, new k&n air filter, and now I am finally done for a few days at least. I am hoping to get out to an off road park tomorrow to run the kdx around. Jessie is planning on her second riding lesson today, when she gets home from work. Hopefully it goes as well as the first did. She was very confident and walked away feeling positive after the first time. I am trying to make sure I don't get too excited and pitch her off in deep end unintentionally. I can't wait to see what the kdx can do in the woods. I can't have too much fun with it though because the bike is headed down to Disney, Oklahoma next weekend for some serious fun!
Working in the garage as much as I have has worked out well though. I keep coming inside and finding the house cleaner and cleaner thanks to my awesome wife! We are finally getting everything cleaned up after being gone every weekend for the past month. Being absent that much and constantly packing and unpacking had taken a serious tole on the house. It doesn't help that we both despise cleaning :)
The only hard part of the bike work this week was the rear wheel bearings. The snap ring in the hub came apart and it took forever to get it removed. The previous owner may have never done anything with them and it is very obvious that the bike sat for a long time without any attention. I think the only thing that saved it was that he stored it indoors. If it had been outside there would not be much left.