Homemade breakfast sandwich to get my work day started today. They don't look like much but they were delicious! Only a few more hours until I'm free to head south! 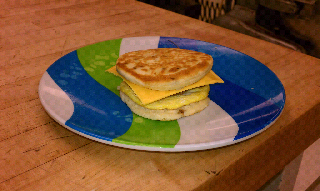 Only two more days of work between me and riding in the Ozark National Forest with friends! I am very excited about this ride. This area is one of my favorite in the country and I can't wait to explore it more closely. Hopefully I don't lose any more parts on this ride. I suppose it makes a better story if things don't go exactly as planned though.

I finished prepping the DRZ last night. The clean air filter made an enormous difference. I had no idea how bad it was until I took it out. It would hold water rather than letting it pass through. 20 minutes soaking with air filter cleaner though and a really thorough rinse made it as good as new. Then spray with air filter oil and we are ready to rock! It was like a brand new bike between that and the new back tire.

The routes, for this weekend are a bit spotty but I think they should suffice for general navigation. It looks like we have a decent chance of rain while we are riding a few of the days but after riding the trails last Thursday in the rain, I am not too worried about it.

On a related note, I have said it before but I love dualsportmaps.com. It makes route planning so much easier. Last weekend I had my gps on the handlebars and had no trouble following the route that I put together before I left. It was easy to alter the route as I went along too. I came to a few spots where the road was closed and I need to make alterations to the route that I had put together. I had no trouble navigating around the obstacles and getting back to my route. I could not believe that I had not been doing this all along!
No comments: 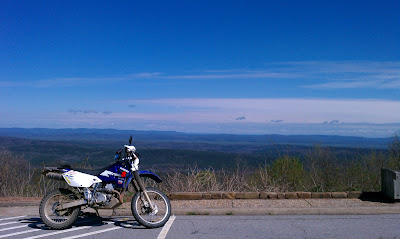 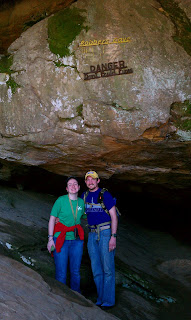 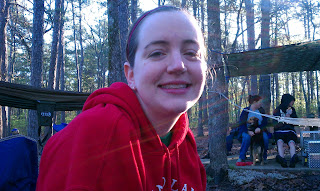 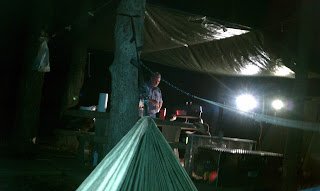 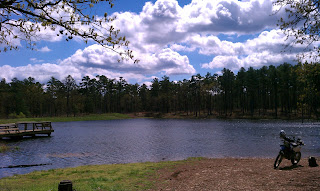 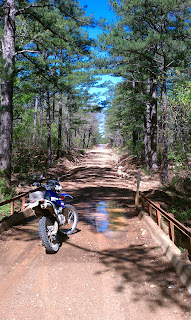 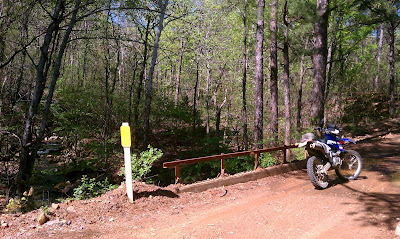 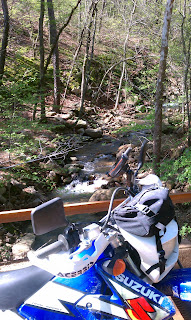 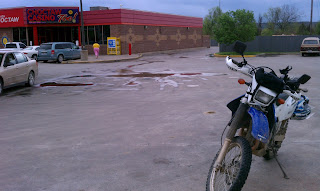 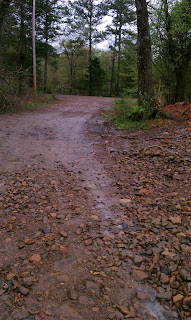 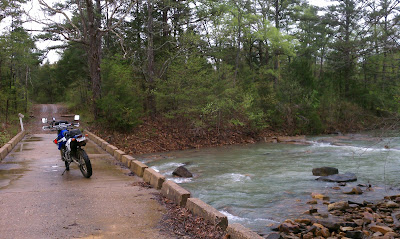 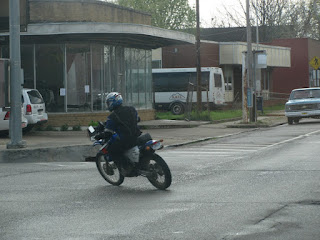 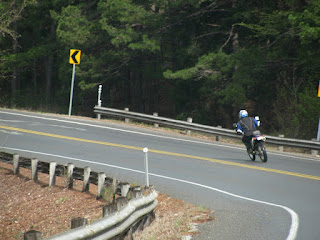 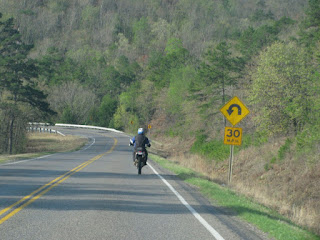 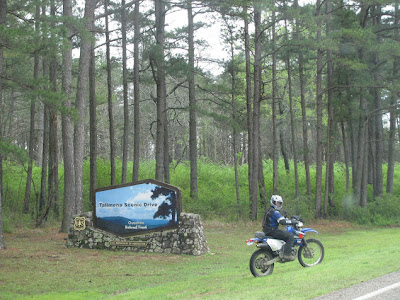 New AC Unit is broken down...

My wife and I just replaced our AC unit in August. It was brand new and professionally installed. She flipped it on for the first time yesterday and it is now down for the count again. The fan on the unit is out. The compressor runs but evidently the fan is out. The really crappy thing is that this is EXACTLY what killed our last unit. Now, thanks to this hi jinx we may have to cancel our plans this week and deal with this instead. I really thought that after putting in a whole new unit, that we would not have to deal with the air conditioner anymore while we were in this house. We are only planning on staying in this house for another year or two so I really hate to throw any money at the house unless I absolutely have to. The upside to the whole thing is that the unit is still under warranty and so HOPEFULLY no money will have to change hands. I am skeptical though.
No comments:

No Flint Hills Stampede for me

It seems like every year something comes up and 2012 is going to be the same. I have to be at the International Food Technology Show in Las Vegas for work when the Flint Hills Stampede is going on. I even had my registration form filled out before I realized that I was not going to be able to attend. Some year though....
No comments:

Packed and Ready For Oklahoma... 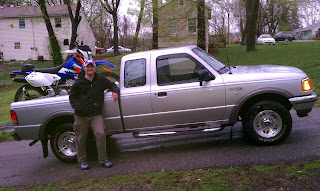 I have the bike up in the pick-up and everything out ready to go! All I have to do is go to work tomorrow and then the fun begins!! It is going to be a great weekend! Seeing the family and exploring the national forest is going to be awesome!!


This is my proposed route of exploration while I am there. It may have to be adjusted though because of all the rain that they have had these last few days. There is a decent chance of rain tomorrow while I am riding too so I may stick to the "easy" stuff since it will still be extremely muddy out.

After have such an awesome Saturday the last thing I expected was a Sunday just as good. We rode about 200 miles of pavement yesterday. There were four bikes and six people. There were three couples and we had an awesome time. We road many of the classic favorites around Weston and Atchison. We hit, 73, 14, 116, H, M, V, and P. P was the only Alphabet road that I had not ridden and it was a great rode. It wasn't as tight as H but there were more twists and turns to get you engaged. From Weston we ran through Leavenworth and back out 5 near where the day began, not far from 45 and 435. At the end of hwy 5 we stopped and stood and talked for a while. Just chatting and having a good time. The rest of the group was headed off to grill and continue the day but my wife and I had to head home to prep for the busy week this week. It was a great ride. It is nice to ride with riders that keep you entertained but never leave you wondering if you are going to make it home or to jail that from that ride.
I wish I hadn't had to pack and clean up the house last night though. Grilling meat sounded phenomenal. I did get some packing done though. Now I just have to get the route planned for Thurs. and Friday!
No comments:

More photos from our Saturday Ride 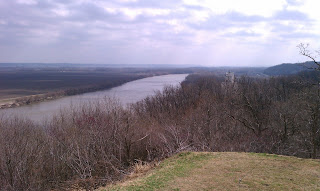 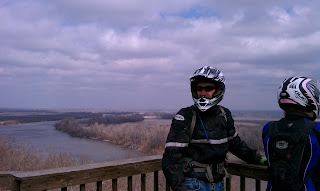 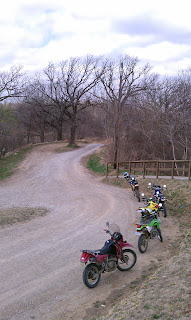 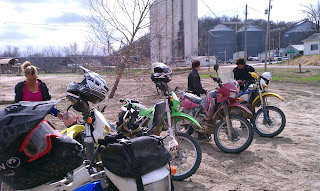 The group just arrived in White Cloud and decided to take a quick stop by the river front. 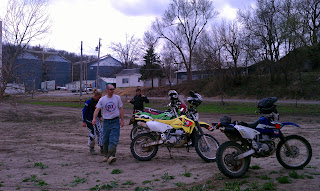 This was our view from our lunch pit stop. The pork tenderloin sandwich was delicious! 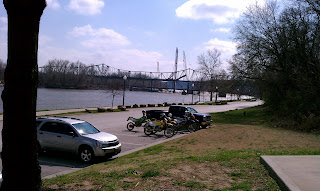 Leavenworth to White Cloud and back

Bikes Ready, now about that weather...

My brother and I spent the evening prepping his motorcycle and my drz is ready to rock as well. Now it looks like there is a fair chance that it will rain tomorrow. It would make the ride more fun in some ways but it will take much longer to get all the way up to white cloud if it decides to rain tomorrow. The plan is still to meet down at the Santa Fe Depot at 8am and then we are off! So far there are four bikes confirmed but who knows how many will show.
No comments:

It took most of the evening. We finally got the new kenda k270 on. It was much easier with the new setup. 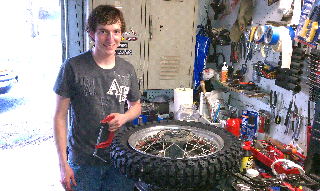 It has come to my attention that I gave no info on how we managed the tire change. A old wheel off a car, with a garden hose split and taped on the open side, helps a ton. The garden hose taped on the open side serves to protect the moto wheel or spokes. Having the car wheel allows the rotor or sprocket to sit protected while you man handle your tire onto the rim. I picked up a wheel for $10 at a local garage, just called and asked and was rewarded. I have the 12" motion pro tire irons (2) and a motion pro deal to clip onto the spokes and keep one section down while freeing up a hand. There are great youtube videos on tire changes that will help.

I never bother with balancing and have never had any problems.

Don't let tire changing intimidate you. It is good practice for trail flats and will save you a ton of money for other farkles. It is a struggle the first few times but you get proficient quickly! Good luck!