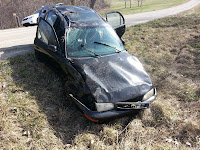 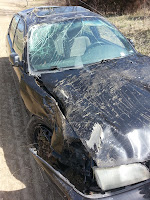 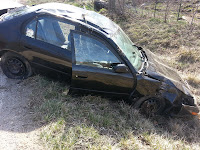 Jess had a very bad morning this morning. She flipped her car on Leavenworth county rd 14 (Rogers rd) on the way to work. She was relatively unscathed but her beloved 97 Toyota Corolla was not so lucky. It did a great job of protecting her when it mattered most however, there was little left of what the car used to be. 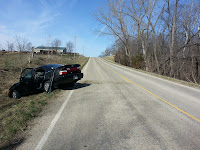 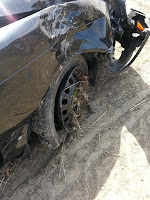 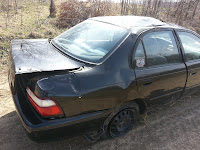 I am counting my lucky stars today though. We can replace the car and all of the possessions inside. Jess was not hurt and that is what matters most. It is sad to see our faithful ever-running corolla carted away for scrap but there was little option in the matter. Jess will be a more cautious driver as a result of the accident. Also, the car is going to be placed at the local high school to help young people consider the cost of inattentive driving or driving under the influence. Even though Jess was not under the influence, if it helps a young person (or anyone) drive more carefully, we don't mind the exaggeration of circumstances. 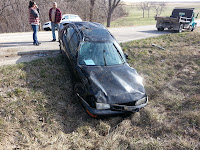 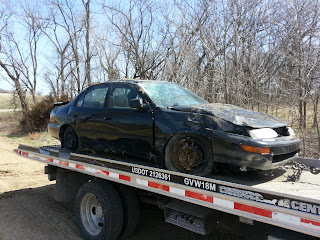 Our corolla will be missed. It was a rough day but there is much cause for celebration when everyone walks away intact. Give your loved ones an extra hug tonight. You don't know what tomorrow will bring and the smallest actions can have grave consequences.

Side note, despite a mostly collapsed front end and a full roll the airbags never deployed. It has been explained to us by multiple people but it still surprised me.
1 comment:

If at first you don't succeed

If you have an issue and just can't seem to sort it out you should keep a few things in mind. Perhaps, that carburetor just keeps on presenting issues. No matter what you do, you just can not seem to nail down what the problem is. You try and try but although you have had it apart countless times it just keeps presenting the same symptoms. Go back to the simplest solution. Go back to the beginning and look at what you have done. Triple and quadruple check all of your adjustments. Chances are you forgot something simple.

I took the kdx 200 apart again tonight to clear up the carb overflow issue. I found debris in there the last time and after clearing it, I didn't take the time to check the float height. I figured that, since I had been very careful when I extracted it, that it would be within spec. Fail.

It was significantly out of spec when I opened it up tonight. I am not certain that I have solved all of the issues, but the gas is no longer pouring out of the carburetor overflow line. I think it is finally ready for a test run at one of the local parks this weekend. I am hesitant to haul the bike anywhere to exciting for fear that it will fail on me and I will spend more time and more gas only to be doing repairs further from home rather than riding somewhere amazing.

We will see though. I am not sure I can resist the call of Arkansas much longer.

Method Two - Setting them Parallel
This method is similar to the first method. It isn’t quite as accurate but works fine if you don’t have access to a set of calipers. In method one when you measure the distance between the bottom of the float and the float bowl mating surface the two are parallel to each other. If you use a straight edge for a reference, a feeler gauge works well, and place it on the float bowl’s mating surface you can visually check to see that the two are parallel to each other. It helps if you angle the feeler gauge towards the float to reduce the distance between the two a little. Tilt the carb the same way you did in the previous method and watch for the tang on the float to just make contact with the needle rod protruding from the float valve. If the two are not parallel at this point the bend the tang and recheck. Ideally you would reassemble the carb and recheck it with the fuel level gauge. If you don’t have a gauge you’ll have to trust you set the height properly."
No comments: