So, your carb overflow is pouring out gas...

So, you have just finished a great day at the off-road park. You pull up to your truck, throw down your kickstand, and notice gas streaming out the bottom of your bike with a trail leading all the way back through the parking area. Flip the petcock "off" and resolve to deal with the problem later. It could be a number of things, but in my case it was simply a large chunk of something keeping the float from seating. The bike ran fine, but the gas mileage was less than ideal, lol.

This problem was easy to fix with just an evening's worth of time. I took of the front fairings, back fairings, seat, and tank off. Finally, I removed the carb itself. Gently, I took the carb apart after cleaning the outside so no loose debris would fall inside. I removed the hoses, added a new fuel line and inline filter, and then removed the bowl itself. I removed the float gently and set everything on a clean cloth. With carb cleaner, I sprayed it in both directions through every port and jet on the carb. When I sprayed it where the float valve seats it forced a big glob of gunk out the fuel intake. Focused on this area now I used a q-tip to be certain it was spotless and free of any debris. With the problem solved, I reassembled everything. Working slowly and deliberately it took maybe an hour and a half at the most.

I also re-tapped the threads on the kdx kickstand in the swingarm nuts. Then applied loctite to both NEW bolts and reassembled the kickstand. Didn't actually alter the size when I tapped the threads, just cleared the existing threads. This seemed to work very well. Hopefully the kickstand will remain attached this time around, lol. It vibrated off while riding in Disney, OK. 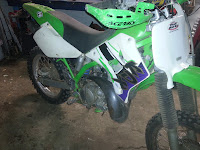 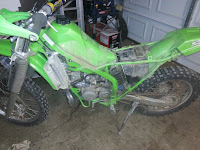 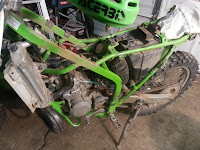 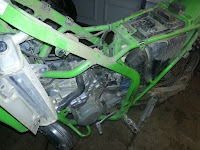 The crud on this cloth is what I pulled out of the fuel intake! Having an inline fuel filter, I am not certain how this got in but I am glad that it was an easy problem to fix. 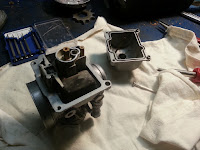 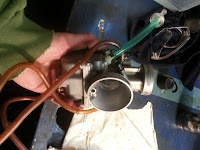